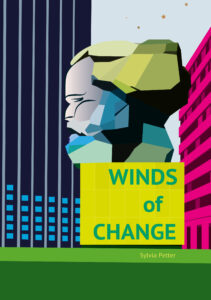 This is the story of how ordinary people react and adapt to political change. With the background of Chemnitz in the Eastern part of Germany it follows the lives of Dieter S., a Stasi operative, and Kai T. the man on whom he spies over the duration of the life of the GDR to which both are loyal because of its creation in opposition to fascism.

“Sylvia Petter has captured with wonderful brevity and efficiency a weird bit of history that came and went in a relatively short time, yet caused incalculable havoc to ordinary people’s lives in the most absurd and petty ways. She tells it in flash form but the story lingers long after you’ve read it.” – Simon Edge, author of The Hopkins Conundrum

“Sylvia Petter’s timely novel in flash evokes perfectly the letters sent, intercepted, and finally received, through which this story of fragmented yet enduring love and hope is told. Set against the backdrop of Chemnitz before and after the fall of the Berlin wall, Petter’s precise prose brings to life in crisp, vivid detail a not too distant past that rings eerily true to the present. A portent.” – Rachel J Fenton, author of Beerstorming with Charlotte Brontë in New York

“Who can you love? Who can you trust? Boldly reimagining the flash fiction form, Sylvia Petter has created an epic tale in a compressed space, a compelling, powerful, poetic retelling of history filled with secrets, dissidents, revolution, redemption and the indiscriminating winds of political change that touch us all.” – Nancy Stohlman, Going Short: An Invitation to Flash Fiction

There are no reviews yet.

Be the first to review “Winds of Change” Cancel reply